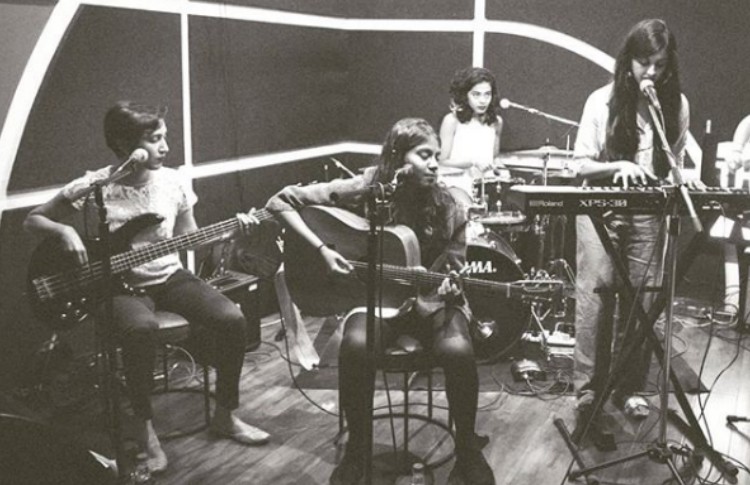 “Bands comprising of all female members should be considered a band and not a ‘girl band.’” It’s a simple statement that most people fail to get, but it’s something that the members of Ladies Compartment want people to understand.

A four piece, soulful ensemble based out of Mumbai, Ladies Compartment comprises of singer-keyboardist Aditi Ramesh, drummer-vocalist Aarifah Rebello, singer-songwriter Ramya Pothuri and bassist Nandita V. Excerpts from an interview of the band with IWB:

Let us begin with a cross-introduction session.

Aditi describing Ramya: Ramya Pothuri is one of the freshest sounding singer-songwriters in the Indian indie scene. She has a remarkable sense of purpose for someone so young, knowing immediately after high school that she wanted to be a musician. Apart from music, she’s lovable, unintentionally funny, and is a caring friend.

Ramya describing Aarifah: Aarifah is one of the nicest people I know and she genuinely cares about the people in her life and wants them to do well and be happy. You feel really comfortable being around her. Her music is super honest, and she doesn’t stop from being completely herself with it.

Aarifah describing Nandita: One thing I adore about Nandita is how passionate she is about music. It takes very little to learn how to play an instrument, but a lot to be dedicated to be better constantly and I think that’s a remarkable trait of hers.

Nandita describing Aditi: Aditi is the most determined and hardworking person that I have the pleasure of working in close quarters and her rise to fame with her tracks topping the music charts is a direct reflection of that. She gave up a well-paying corporate job to follow her passion, and that in itself is a life lesson. “Do what you love (to the best of your ability) and the money will follow.”- Marsha Sinetar

Give us a peek into the creative process that goes into creating songs.

Aditi generally starts the process with a chord pattern, and ideas for vocal harmony arrangements. It’s typically easier for a keyboardist to visualise harmonies and arrangements, given the nature of the instrument. Aditi and Ramya then add melody and lyrics and Aarifah and Nandita then set the meter, in effect tie together all loose ends of the piece and tighten up all transitions between parts. However, we’ve been trying out different processes as well and our newest song was written by our bassist Nandita and then built upon by the rest of the band.

Spill the beans about your jam sessions.

Our jam sessions begin essentially with a mini catch up of the events that went down in our lives; yes, we are just short of a pyjama party scene. We eventually collect our thoughts and fuel our imagination while playing cool chords or beats or trying out harmonies and this could involve making new covers or just working on new music.

As four young Mumbai women, what are the issues and experiences from your personal life that become part of your songs?

Our original songs reflect many of our everyday experiences ranging from not getting sleep to finding your purpose in life. We feel our songs are real and relatable to almost anyone.

Tell us about the sexism that women performers face. Has anyone of you faced it?

Sexism is faced by female performers and all women of most professions. We are often underestimated or not taken seriously by concert goers or venue programmers. Sometimes a programmer will say we can’t get a drum kit and must do with a cajon when know for a fact that bands with male members have used drum kits at such gigs. However, we combat this by being assertive to such people, not dwelling on it and instead aiming to excel in everything we do.

There is a general perception that women are not good with technicalities. Has anyone ever doubted or questioned your technical proficiency of recording or mixing songs?

Like we said, people never expect it when they hear us play. They stereotype an all-girl band to be about pretty airy music and with more emphasis on the singing. However, we usually just let our music do the talking in such situations and the misconceptions get cleared up.

This question comes from our in-house musician, Komal Panwar – have you ever fallen in love with a face in the crowd?

Most of us have a tendency to either close our eyes while performing or generally being in another space. There isn’t much focus on actual faces in the crowd.

Is there a pay gap between girl and boy bands?

There actually isn’t really a pay gap between all-girl bands and other bands. But the indie music industry generally underpays all bands equally.

We saw that each one of you also works separately and we love the creative space that you have given each other. So, tell us about the essence each one of you brings into the band that you’ve learned individually.

Aditi is proficient on the keyboard as much as she is a vocal powerhouse and she works with other musicians who focus on other genres too,  so she is always loaded with unique ideas on how we can shape our own original music. Ramya has her own style, be it singing harmony or playing simple dreamy guitar chords that elevate our songs to a whole new level. Aarifah has the softest, most lovable voice and plays the loudest instrument. Playing the drums and singing at the same time is a talent in itself. Nandita is a budding bassist and is constantly learning from the other three and so it becomes easier to build a bass style specifically for the band.

240 Likes, 2 Comments – Ladies Compartment (@ladiescompartment) on Instagram: “It’s been a packed and fun month! Our first ever tour together was a great experience 😁One gig to…”

Is entering Bollywood part of the plan?

We don’t have plans of entering Bollywood right now. We are however working on some music arrangements in regional languages.

What do you want changed in the music industry for girls?

Lastly, what is the dream future of the band?

We kind of take each day as it comes, and it’s been going great. We hope to write and release music that challenges us and encourage more girls to take up an instrument. The rest will follow. We also hope to have a rolling lineup of women artists and maybe eventually a big ensemble.