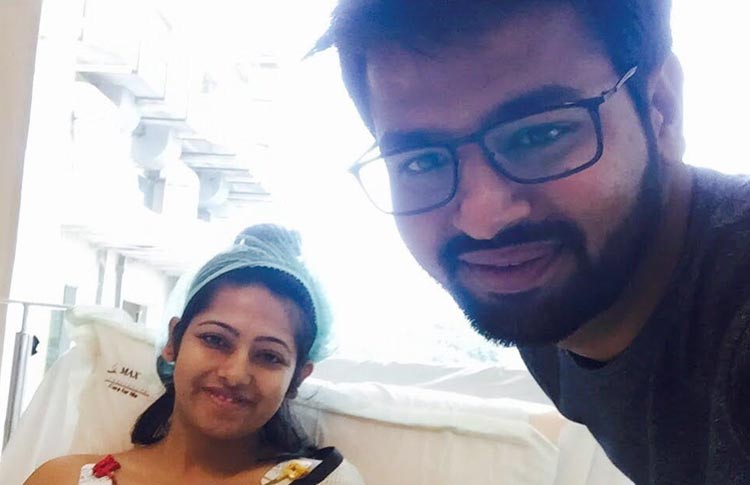 “One of the greatest gifts I’ve ever gotten come from God… I call him Daddy.”

They say miracles don’t really happen and are a made-up myth to comfort us. But, I saw a miracle today.

When Akhilesh Gupta was younger, he remembers being the naughtiest little kid. Since he was the youngest, growing up with his parents and two elder sisters was a ball. He LOVED it! He was pampered, loved, and forgiven for sometimes being a bully, too.

“Niharika didi lives in the US, and Vartika didi was married recently, in December.”

But, things are very different today.

The hard times make us more real than anything ever can. This February, Akhilesh swears to have seen the worst time of his life.

“The day Vartika di was getting married, last December, Papa wasn’t in the best of his health. For the same reason, he could only be present for her ‘pheras’ for not more than a few minutes. He returned home to be given an Albumin drip. Needless to say, half of our attention was with dad.

His father had a liver failure, and a donor was required as soon as possible. There was no time for the family to show any emotion. His sisters were called to their hometown because things were getting serious.

“Papa was rushed to Chennai for Cadaver listing in June.” A cadaver is a condition when a human being is being declared brain dead, but all of their organs are in a condition to be donated.

Their father refused to accept any organ donation from his children.

Akhilesh continued, “We covered all states to find papa a brain-dead donor. Unfortunately, in the meantime, his case got worse, and he suffered a kidney failure. Now, he needed a kidney donor, too. That is how time became a ticking bomb for us. The doctors said there was no time, and we only had 20 days to get through with the transplant.”

A constantly racing heart and fear to hear the worst, a tiny ray of hope reminded all of them that they were still breathing. “Papa had a fighting chance! My sisters didn’t want to have it any other way.”

The big sisters forbade their little brother from undergoing the transplant, and their parents forbade them all. That’s when Niharika and Vartika took charge. “We don’t want to regret not taking this decision, years later, mom. We have to do this for papa. May I add something?”

Akhilesh: I really hope that more people would come forward and be open to organ donation. When we were adding our names to the Cadaver listings, I realized that there is no awareness about the subject in North India, while the South of India has taken this up pretty seriously.

Agreed. I think Akhilesh’s story inspires me to sign myself up for organ donation, too. Are you going to do it?

I am sure it wasn’t easy for your sisters. Did their families raise any questions?

Akhilesh: The families of my sisters? No. In fact, they were with us at the hospital, most of the time, day or night. You know what is wonderful? There was never a case of having to seek permission for it since both families were extremely supportive.

It is not easy, I think, considering that Vartika didi got married just last December, and neither of them has had a child, yet. Clearly, everyone put aside other concerns to focus just on our father.

“When the transplants (of kidney and liver) were successfully done, and my sisters were brought outside, our family, their families, everyone stood there applauding. My sisters were heroes.”

Your father’s birthday was also celebrated in the hospital. How did you all plan it?

Akhilesh with his parents

Akhilesh: So, there wasn’t much we could do, because it was a hospital. And, at that time, since Papa had had a liver failure, all the toxins would collect inside his body and attack his brain. Due to this, he would often forget events. He would say things like, “I won’t go to work today, I am not feeling so well.” This condition is called Encephalopathy. There was a time when there was fear that he could forget to give the breathing command to his brain. So, we also had to put him on the ventilator.

Anyway, getting back to the birthday celebration, my sisters wanted to make papa smile. So they decorated his entire room with balloons when he was in the washroom. Of course, doing that was not a piece of cake because we had to seek permission from the doctor.

The only thing papa wanted was the ‘cake’ after cutting it. So, he just said, “okay, come on, give it to me, now!” This was long before the transplant. Currently, he is in the ICU, and we are not allowed to see him.

How are your sisters?

Akhilesh: My sisters? They are warriors! The elder one is currently in UP, and after the bed rest of a month, she will go back to her home in the US.

They are supposed to strictly take care of themselves for the next three months, and now their families are looking after them.

Though, they possibly hate me right now!

And, why is that?

Akhilesh: I have this weird habit of poking someone who has just been hurt. As a child, if any of them fell off the bicycle, I would always poke the bruise, just to make sure it was real. Haha.

So, when my sisters were being taken into the OT, I jokingly said, “tumhare stitches to main hi kholunga.”

And, how is papa? What do the doctors say?

Akhilesh: He underwent an 18-hour open surgery, I mean it was a combined liver and kidney transplant, so it is going to take some time. Papa needs to stay away from infections as much as possible. He is in an isolated room, right now, and we can only see him through a CCTV camera. His immunity is really low. So, for now, he is still in the recovery mode. These three months of keeping him under observation will heal him.

How is mom holding up?

Akhilesh: My mom is the strongest human being I know. Papa has been ill since 2002. He got TB, back then, followed by a paralysis attack a couple of years later, and a kidney transplant in 2011 (my mother had donated the kidney to him, then). Without her, it would have been impossible to live through the worst of our times.

A lesson you & your sisters learned from your father?

Akhilesh: Our father always says one thing, “Never keep any debts.” From the beginning, since when we were children, he has always said to us that, “Be good human beings, and one of the ways to do that is to be as content with what you have, as possible. Work hard for what you need, and at the end of it all, you will never regret anything, because everything you did, was on your own.”

A message you’d like to give to your sisters?

Akhilesh: I always laugh when you have those tears of love in your eyes, calling you overdramatic, or make fun of you. I poke you when you get hurt. And, I know, there were times, when as a teenager, I would run away to ‘chill’ with my friends, even when you were visiting for just a couple of days.

When I was a child, all of you spoilt me, together. Yet, when I waited for all three of you to be safe, while you were in the OT, everything changed, you were not my sisters, anymore. You became my God. And, even though, I probably don’t say it enough, I love you Neha & Vartika di. You are the reason I could smile again, and you are the reason, I am hopeful.

Words can never do justice to explain the feeling, but, at least they can make me feel better. I hope they make you feel better, too.

Because, I don’t know if love can heal everything, but daughters can…