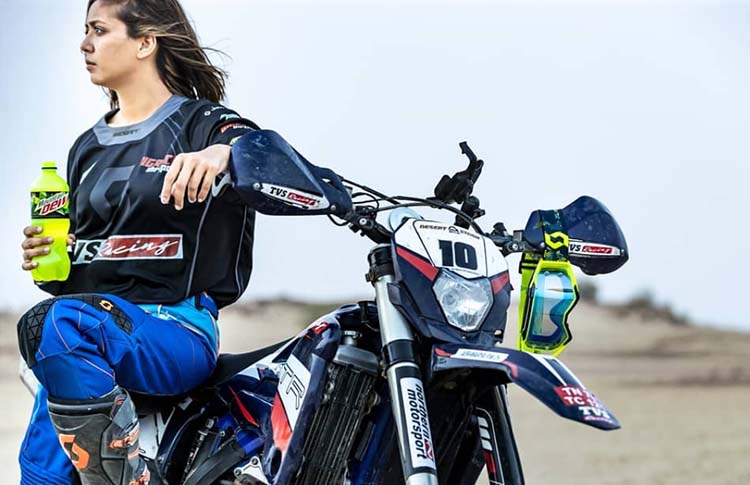 The stories of firsts forever remain unique for they speak of the struggles made by a protagonist during unfavorable conditions and making it till the very end. Today, we have Aishwarya Pissay with us who recently became the first-ever Indian athlete to ever win a world title in motorsport.

This 24-year-old is an Indian Circuit and off-road motorcycle racer who secured the first rank at the FIM Bajas World Cup 2019, and the first prize in the women’s category and the second in the junior’s category. She is also the first Indian woman to have won six National titles in Circuit Racing and Rally Championship combined.

2,389 Likes, 46 Comments – Aishwarya Pissay (@miss.pissay) on Instagram: “Don’t wait for opportunity, create it! . As I gear up for Baja Aragon in Spain with Sherco TVS…”

IWB indulged Aishwarya in a hearty conversation to talk about how she found her passion for racing that has eventually brought her on the world map. Excerpts below:

Hello, Aishwarya. Please introduce yourself to our readers.

I live in Bengaluru and come from a conservative family where doing anything apart from a nine-to-five job is considered a taboo. My folks always wanted me to live a secured career life while keeping the hobbies simply as my passion. However, their perception slightly began to change when TVS racing signed me as their Factory Racer.

You found your love for riding bikes before you turned 18. There are stories of how you’d ride your bike for hours during weekends. What’s your earliest memory like?

I started riding motorcycles out of mere excitement during the time when I would go on weekend breakfast rides with friends or for mini-vacations in the outskirts of the city. This slowly escalated to a 24-day long bike ride from Rann of Kutch to Cherrapunji, after which I knew that riding gave me a sense of freedom. Nothing has changed today as I feel alive every time I am on a bike.

Baby Steps. . Sometime the smallest step In the right direction ends up being the biggest step of your life. Tip toe if you must , but take the step. . Thank you @_22nelly and @ashish_raorane . 📸 @man_made_machines . #tvsracing_official #bigrockdirtpark #bigrockspain #aishwaryapissay #gopro #me #lifebehindbars #babysteps #aintnormal #instagood #explore #bike #motorsports #fmsci #motorcycle #motorcyclelove

3,020 Likes, 26 Comments – Aishwarya Pissay (@miss.pissay) on Instagram: “Baby Steps. . Sometime the smallest step In the right direction ends up being the biggest step of…”

Tell us more about how the TVS deal happened.

I was pretty clear that I wanted to take my passion to a professional level. Hence, I enrolled myself in a training center in Bengaluru called Apex Racing Academy. There, I got well-trained under experts for circuit racing. This polished my skill and helped me win a couple of championships. Looking at my performance, in the year 2017, TVS Racing signed me on as a Factory Racer which helped me pursue racing full-time and simultaneously brought me exposure.

What important lessons did you learn at the Apex Racing Academy?

My training with Apex Racing academy really shaped me as who I am today. I am grateful to my coach who never trained me any different than the boys in his class. We were taught to believe in the fact that the race track never discriminates because of one’s gender.

7,777 Likes, 31 Comments – Aishwarya Pissay (@miss.pissay) on Instagram: “I am just a girl chasing her dreams and having an amazing adventure. . @tvsracing_official…”

At the beginning of your career, you’ve participated in extraordinary races like the National Road Racing Championship, Indian National Rally Championship, Honda One Make Championship, etc. Did it ever bother you that we’ve only a handful of female riders in the field?

It’s a fact that Motorsports has always been considered a male-dominated field. However, I can say, from my experience, that the ratio is getting better since the time I started. From being one woman on an all-men grid to having an all-women grid now, I see the patriarchy get on a bumpy road and slow down. I believe it’s improving majorly because of the support women are getting from the two-wheeler manufacturing brands, tyre manufactures, and FMSCI.

3,412 Likes, 97 Comments – Aishwarya Pissay (@miss.pissay) on Instagram: “🇮🇳Happy to update that I am currently leading in the Women’s Category and 2nd in the Junior…”

Personally, have you faced any stereotypes?

Yes. I have encountered situations that were sexist, but that’s only in India. In the West, all the genders in this sport are treated equally.

Talking of the races and rallies, how do you prepare yourself for the grand events like Baja Aragon World Rally and FIM Bajas World Championship?

I train outside the country at Big Rock Spain, where I prepare for important rallies like these. The trick is to train on the bike as much as possible.

1,359 Likes, 12 Comments – Aishwarya Pissay (@miss.pissay) on Instagram: “Your wings already exist. All you have to do is learn to fly, and the best place to do so is…”

In the past, you mentioned suffering some ‘career-threatening’ injuries. Share about this rough time and your perseverance during the recovery-period.

I have had two major accidents, one of which was a life-threatening incident while in the other, I broke my collarbone. Mentally, it’s never easy to overcome a phase like this and physically, it is too painful to contemplate anything. But I, as an athlete, always knew that I needed to bounce back no matter what. I couldn’t just put my hard work in vain because of such a misfortune occurrence. As a sportsperson, the first thing you learn is to never give up and be a sport instead. Moreover, the fact that you’re always surrounded by inspiring people like your coaches, team members, media, fans who look up to you is the reason enough to get back on your feet. You just can’t disappoint yourself and for that matter, any of them.

Discuss your daily practice, mental rituals, and other important habits that make you number one.

I have a strict training routine that I follow. This includes three days of a week at the gym, where we work on my physical strength and conditioning along with mental conditioning and nutrition. Over the weekend, the rest three days are spent riding my favorite motorcycles and practicing diligently!

Before we wrap up, we’ve got a fun quiz for you.

a) Which myth about women motorcyclists do you want to run over?

Riding a motorcycle is a skill and sorry, it doesn’t get better because of your gender.

b) Who do you want to roost?

c) What/who can you apply the brakes for anytime, anywhere?

d) Who has the highest chance of enjoying a joyride with you?

It’s not just one place. I want to travel the entire world on my bike!