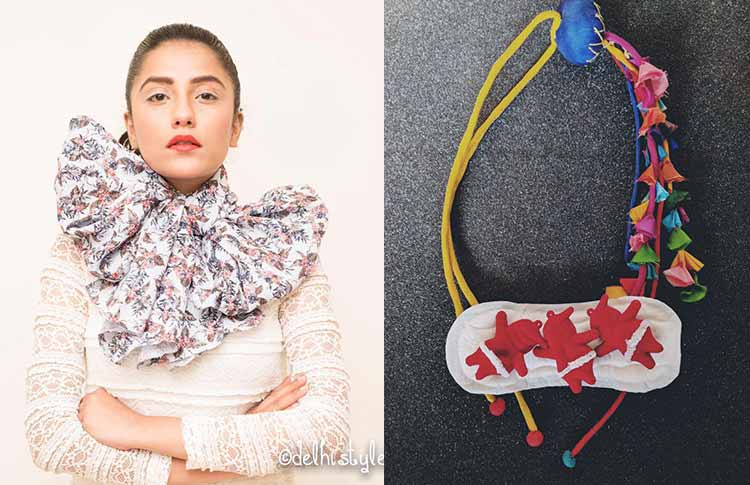 “Dare to pick up a sanitary pad pack without the black plastic bag. Hell, ask for the bill and you get those scandalized looks as they are horrified by your besharmi of demanding a written proof of such a ‘shameful’ object. So, I thought why not wear this around the neck and choke this shitty mentality with it,” said Aanchal, sending me a picture of her latest creation- a pad necklace.

When IWB  last conversed with Aanchal Sukhija, she had showcased her chic recycled jewellery made using kitchenware and plumbing pipes at the New York Fashion Week.

With her brand Mission Pluto, she was on her way to transform the waste created by us, humans, into mesmerizing jewellery pieces. And now she is set on cleaning the garbage of the biased mentality around menstrual health by creating art with pads!

Curious to know her ideology behind the same and what spurred her to pick a supposedly ‘taboo’ topic for her creations, I chatted with the vivacious lady in question. Excerpt:

Tell me about these pad necklaces you are making?

I have just made the first part of my collection, which comprises of five pieces. I’ve tried to give a very avant-garde and European look to the sanitary pads and panty liners using pastel shades primarily and by adding ice cream cups, wooden spoons, pompoms, and candies.

And as I can sense what you’re going to ask next (laughs), let me tell you that the collection is yet to be launched but yep, the shoot is scheduled to take place soon.

That’s great! Looks like it wasn’t just mainstream actors like Akshay Kumar who openly talk about pads and menstruation.

Actually, it was his film PadMan that really inspired me. The message of menstrual health it portrayed, and that too with such genuine concern about the issue, was just amazing. But the campaign it triggered where celebs took to social media for a one-time-click holding a pad seemed to me like a marketing glitch.

Yep, because no matter how many stars posed with a pad on social media, in the minds of people a woman on her periods is still a topic of shame or is made fun of. I remember, just recently, I was in my office in Okhla and I started chumming. Apparently, I have to be hyper-alert about them, because as I was caught unaware my light-colored pajamas were stained red and the people in my office made fun of me, they were like “Hey, why didn’t you carry an extra pajama or wear a dark one when you knew your periods were due?”

Cool beans! But…it is necessary to point out here that this wave of interest from Bollywood stars in issues of menstrual hygiene seem to also be closely tied to the fortunes of their colleagues’ film. #PadManChallenge

So, these very people were liking the posts of the celebs were proof that especially in India, people have been unable to get over the fact that women have periods, that they are as natural as the air you breathe in and it is okay to stain your clothes.

You are right there. So, you find that the #PadManChallenge has not left any concrete mark?

Well, I think it would have proved to be more effective if Sonam Kapoor had flaunted her stained pad because it is the idea of what we use the pad for that gives traction to the taboos around it.

Thank you sir ! I accept your #padmanchallenge Yes that’s a Pad in my hand & I don’t feel weird. It’s natural, Period!‬ ‪Copy, Paste this & Challenge your friends to take a photo with a Pad!‬ ‪Here I am Challenging @jacquelinef143 @arjunkapoor @reallyswara

I remember there was this campaign by Don’t Hide It. Period. where they posted pictures of women holding used pads. I also took part in the campaign because it felt worth it but these squeaky clean pads these celebs are holding up just appears to be another promotional strategy.

You earlier recounted an instance where you were shamed for bleeding…

And it wasn’t for the first time either. I was staying in a hotel once and you won’t believe, Apeksha, they asked me to pay more because while I was sleeping, I got my chums and the bedsheets were stained. If it had been a tea-stain or something, would they have treated it with the same contempt? I obviously felt insulted by their behaviour and asked them don’t they have a mother or sister at their house?

You know what they said? They said, “Yes, we do but they don’t have periods.” Such is the level of secrecy maintained in Indian households where the men of the family are kept away from knowing these “impure” details.

Such narrow-minded mentality exists around the natural process of menstruation. Is that why you chose pads for your designs this time?

I was right about done with such close-minded attitude around the issue, Apeksha! People are ashamed of the very word ‘pad’ so I thought why not wear it around the neck and kill the shitty mentality people have about it. I say, wear it with your nice kanjeevaram sari and wear to the wedding, to the functions, bloody show it to all those who have made holding a sanitary pad packet a degrading feeling.

I don’t know about wearing it with a sari, but I’ll definitely give it a try. Well, how about a celebrity wearing it, after all not all of them are into just into promotions?

True, so I would absolutely adore it if Sonam Kapoor wore it.

I always thought that the taboo around pads will only break when it’s not just the women taking a stand for it, what do you think?

Well, you’ll be glad to know that the shoot of the pad jewellery, it will be a male model wearing the necklaces. And by the way, all the pieces I have created till date can be worn by both men and women and so can the pad jewellery. I ain’t got time for gender-tagging my creations!

You have a very open and revolutionary mindset, Aanchal, but does your family have a similar outlook?

I have been truly blessed to have parents who never shied away from the topic of menstruation or sex education, they never send their kids in the battle unprepared.  We were never shamed or taught to be ashamed of our natural processes like I remember the day I got my periods when I was in 10th class. We were having a family dinner when I stood up and saw the ivory cushion I was sitting on stained red.

Instead of shaming me or making me feel small, everyone started congratulating me on finally becoming a lady. They were openly giving me pads, imagine that.

You truly are blessed! I remember being frozen in terror the day I got my periods because I had no idea that it was natural. So, tell me how you pamper yourself during your periods?

I become best buds with the love of my life- acchar! I When I am on my periods, nobody dares to take away the pickle jar away from me. It’s my birthright in those days.

Haha! Talking about rights, what do you think the much-debated topic of ‘women getting period leave is wrong?’

That’s bullshit. If men were bleeding, na, then they would have announced a national holiday in those days. And as for me, I wouldn’t want a period leave but still, it should be a choice because everyone feels pain on a different level, many have such severe cramps that they are unable to even move and no one should have the privilege to rule out their discomfort.

I agree with you here. So, Aanchal, do you see yourself as an artist contributing to breaking menstrual taboos?

I just see myself as another person who is confidently putting a voice forward. When I used to blog, it used to be via words and now it is through my creations which is like a collaboration with my mind and my soul.