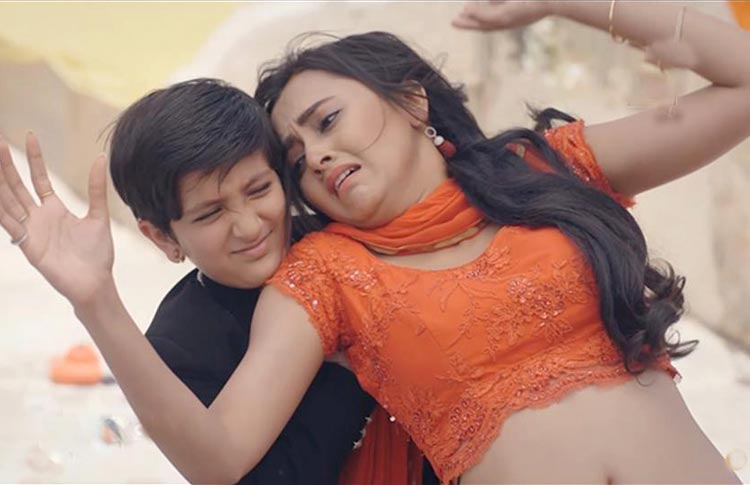 We say that India has progressed but if you ask actor Tejaswi Prakash of  ‘Pehredaar Piya Ki’ she would say otherwise. In the short period since the show was on-air, it has gained quite a status owing to its ‘progressive’ plotline.

When Balika Vadhu adorned our screens we were blown away by its revolutionary take on child marriage and soon it garnered it a huge fan following that persisted even when the show lost its charm. But apparently, the makers of ‘Pehradaar Piya Ki’ were wrong to expect the same response.

Starring as the hot controversial topic since its inception, the show follows a 10-year-old boy marrying a woman, Tejaswi Prakash, who is twice his age, who is his ‘pehredaar’ and he her beloved. But while the audience was able to digest the taboo topic of child marriage and young girls being married off to old, soon-to-die men, the certainly aren’t up to facing the prospect of a child romancing a woman.

In fact, even celebs like Karan Wahi have slammed the show, “For the love of God and for the reason, we all got in this industry please don’t sell me stupidity in the name of content which gives TRP because honestly, no one is watching this.”

The storyline and its depiction on screen have caused quite an uproar among the audience who have drafted an online petition to ban the show after the suhagraat and honeymoon sequences. It has reached the Ministry of Information & Broadcasting, and minister Smriti Irani has taken prompt action against the show by writing to BCCI (Broadcasting Content Complaints Council).

But if to believe Tejaswi Prakash, the lead actress, the show is rather progressive for the present times. In an interview with Hindustan Times, she defended the storyline and said she isn’t the least perturbed by the news of the ban. “Do I sound like I’m affected one bit? I’m somebody who is always going to be proud of my actions and stand by [the decisions] forever.”

The matter gained momentum after the controversial suhagraat scene and news of a honeymoon in episodes to come. “The scene shows us [the kid and me] playing with flowers, and then I even fired the two girls who decorated the room. So whatever reason created the trouble, I don’t think the accusations are even valid. Anyway, I’m not here to judge [anyone], because people have their opinions,” she said.

The actress feels that the flak the show is receiving because people find it to be showcasing regressive content is rather a partial treatment. “It also happened in Game Of Thrones… People love Game Of Thrones and if the same thing happens in Pehredaar Piya Ki, then it’s an issue.”

Imploring people to stop “judging a book by its cover,” she appeals to people to at least watch the show before raising any red flags. Though what she says holds absolute truth, but what is there in store for the show is yet to be seen.