Actor-Filmmaker Taranjit Kaur On Self-Love, Typecasting, And Being A Part Of ‘She Cannes’ Squad 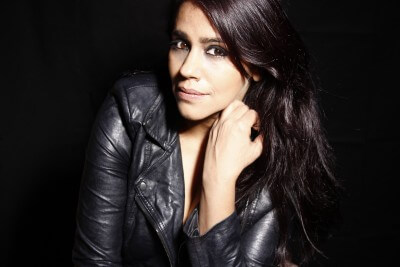 Theatre and film actor, Taranjit’s acting journey started from her hometown Chandigarh, and later took her to Calcutta, Mumbai, and all over the world. Known for her role in Oscar winning film Raju (2011), and Rajat Kapoor’s directed critically acclaimed film, Ankhon Dekhi, Taranjit has worked in multiple independent films, made a guest appearance in 2016 released Airlift, and also done a TV series, Adrishya.

Talking about her interest in filmmaking, Taranjit shared, “I had always been curious about making films, and during the time I spent at the Satyajit Ray Film School in Calcutta, I began experimenting with making documentary films.” The talented actress was invited this year for Cannes 2019, where she presented her short film Loving Myself (now: Love Sex Soprano), and also talked about another, Goga: A journey Of Love. Both written, acted, produced, and also directed by the actor herself. Speaking of it, Taranjit also writes poetry, and is being invited to a lot of spoken word events in Mumbai, lately.

More about this versatile actor in the excerpts of our conversation below:

Let’s begin with you giving us a quick overview of the experiences that you’ve had on your journey so far?

I was fifteen when I started doing theatre, and soon after enrolled in renowned artist Neelam Man Singh’s theatre school. We performed all over the world and that gave me a lot of exposure. Later, I joined my sister in Calcutta, who upon moving there after marriage had opened a theatre school. I taught kids, did workshops on theatre therapy with women, and while there also got associated with Satyajit Ray Film School and worked in a couple of diploma films.

It was in Calcutta that I got the offer of my first film, too. Raju was an Indo-German film, for which I auditioned and got selected, and which took me to Cannes. The film won the Student Oscar Academy Award at Cannes, made to several other film festivals, and received a lot of media coverage. It brought in a lot of exposure for me, and I started receiving film offers, too.

Was that the time when Rajat Kapoor’s ‘Ankhon Dekhi’ came your way?

Yes. I knew Rajat from the theatre days, and it was around that time when he got in touch with me to talk about Ankhon Dekhi. I had a wonderful time shooting for the film and got to learn a lot. My character, Lata chachi (Rajat’s wife), received a lot of critical acclaim; but coming from theatre, until then I hadn’t really thought of doing films, and so it was then when my actual struggle started.

I read in one of your earlier interviews that on the flip side, the film’s success had you dealing with typecasting for a long time?

Yes. So I got offered a few films, but for roles similar to the character of Lata Chachi – to play either a daughter-in-law or mother from UP. Which, too, I didn’t have a problem with, but the story had to be interesting; given my theatrical background, I was looking for varied roles and opportunities to challenge myself as an actor. So in that period I had to turn down a few offers, and in the meantime happened Airlift, in which I play a guest role, and also the only TV series that I’ve done, Adrishya.

When did you get into filmmaking, and where did the inspiration of making ‘Goga – A Journey of Love’ come from?

I had always been curious about making films, and during the time I spent at the Satyajit Ray Film School in Calcutta, I began experimenting with making documentary films. Gursimran Kaur, Goga as she was fondly called, was my great aunt. She was a courageous woman who lived a very dramatic life, and as I child I was very intrigued by her. She was unlike any of my other aunts – courageous, outspoken, and fearless.

You must have gotten to learn a lot from her – intrigued to hear more!

After she moved to Canada we would often talk on phone, and initially the idea of making a film had come from there. To make a documentary based on our phone conversations, and for which I started recording our phone calls, too. But in 2008, she visited India and that gave me a chance to interact with her in person and learn more about her life journey. She was one of the first Indian women to get divorced, and always ahead of her time, she fought for her rights. Later she migrated to Canada, where she married a Muslim man, but the marriage didn’t work. And though she lived most of her life alone, she always believed in love, and that is what I have tried to show through the film – journey of finding love.

It was at the age of 60 that she met her soul mate, Lee; and when she passed away in 2015, I went to Canada to fulfill her last wish, which was to be buried in the same grave as him.

There’s another short film of yours that you took to Cannes,‘Love Sex Soprano’. Which aspect of journeying into self-love does the film explore?

Basically, I am working on a series of short films. I feel that as an actor you portray someone else’s role and I had a strong urge to tell my stories – ones that I had based on my own experiences and also from my observation of other women’s lives. Different women are going through different things in life, but there exist invisible threads that make their stories and situations similar to each other. When I went to Cannes as a part of the ‘She Cannes’ Squad, I met a lot of women from across the world, and it was something that I gathered based on my observation and the interactions I had with them.

Love Sex Soprano is a film that details into the aspects of a woman’s life journey from puberty to adulthood. How the period of puberty sees a little girl build a new and rather strange romantic view of life, moving onto her experiencing different shades of relationships, and finally reaching the stage of understanding the importance of self-love, of finding love within before outside. In some way, it touches upon the perspective of women’s empowerment and the idea of having a gender free outlook. But most importantly, it gives the message of finding happiness within regardless of what happens.

As we wrapped our conversation, and chatted a little more about the subjective nature of the film and its relevance in today’s times, Taranjit also mentioned about one of her spoken word pieces, called ‘I Am Not A Virgin’ that came out in April this year. With over 2 million views, it had garnered a lot of attention – give it a listen!