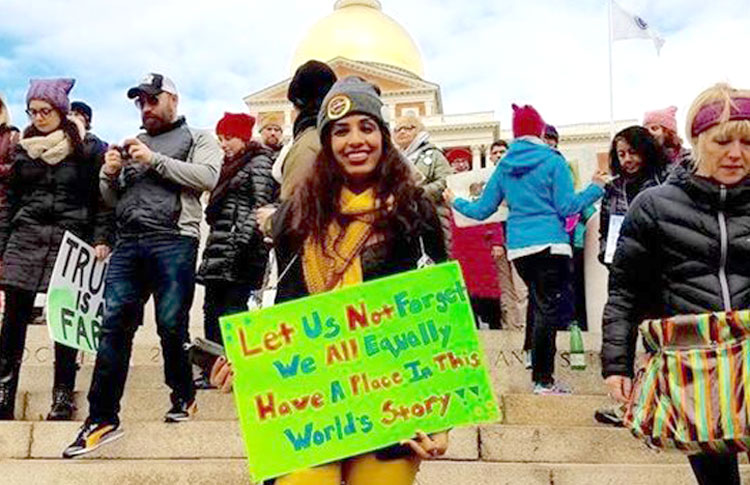 20th January 2017 is marked as one of the turning dates in the history of the United States. This day President-elect Donald Trump assumed office.

Despite having won the elections against Hillary Clinton, Trump has a long way to go to unite the people of his nation and win their hearts.

Wondering what makes us say that?

Well, right after his swearing-in ceremony thousands of women came out on the streets to voice their determination to stand for their rights. Remember we spoke to Mariya Taher from Sahiyo where she gave us insights on the practice of Khatna?

Apart from being an active part of Sahiyo, Mariya Taher works on the issues of domestic violence at Asian Women’s Shelter and Saheli Support and Friendship for South Asian Women and Families.

Peaceful and beautiful as she called the march, Taher shared with us her empowering experience from the Boston Women’s March in this conversation.

JWB: What motivated you to participate?

Mariya Taher: The overall mission of the Women’s March is what inspired me to join.

The inclusive nature of the march align with the values that I myself hold, and it felt important to take part and to stand in solidarity with all communities to speak against violence, oppression, and hate of all sorts. After such a divisive election in the U.S., it felt good to be reminded that our nation can unite to speak up against injustice.

JWB: What was the most exciting thought you registered in your head during the march?

JWB: How would you remember this event after 25 years?

Mariya Taher: I know I will always be grateful to have participated and witnessed it. Yet, I also hope that in 25 years, I can say that the women’s marches were the beginning of something even greater. I wish there to be more inspired people from all over to become actively involved in political, social or environmental causes. I hope that people will become more socially conscious about their communities and work towards uplifting them in their maximum capacity.

JWB: And lastly, any fresh thought on feminism that the march inspired you with?

Mariya Taher: The women’s march was powerful, and I am so glad I was a part of it. However, I do want to say that we all need to look at feminism in a more holistic way, so each individual is treated in an equally respectful manner.

We need to have an intersectional approach towards feminism. In other words, feminism isn’t just about looking at women and men and ensuring they are equal. It is more than that. Feminism is about including all genders. It is about understanding that feminism operates on a spectrum, and we should equally represent LGBTQI communities and their experiences. We must look at feminism in the context of women of different colors, ethnicities, and races.

I would also like to say that no matter how wonderful my experience participating in the women’s march was, it cannot be a single event and finish there. I think the challenge that lies ahead of us is what more can be done to sustain the much-ignited consciousness.