Abida Rasheed On Preserving The Mappila Culture Through Food 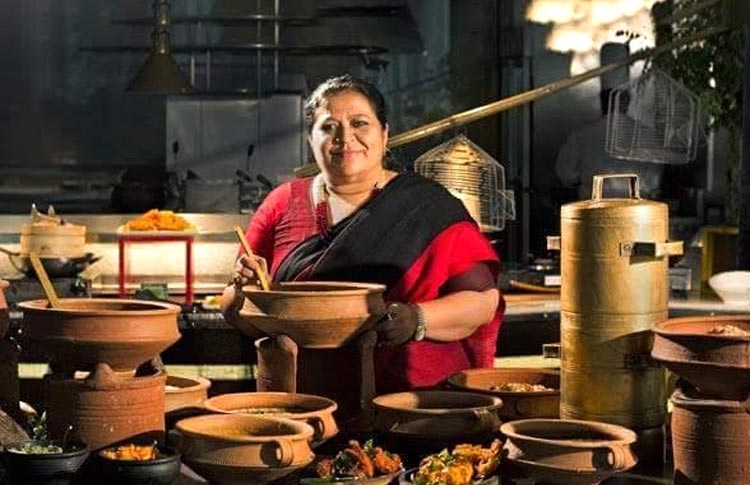 “Anything overdone or underdone won’t do – it’s all about the balance,” says one of Kerala’s best-known home chefs Abida Rasheed.

Rasheed hails from Calicut and belongs to Malabar Muslim community. Her community members are also known as Mappilas or Moplahs, and she is on a pursuit to share the tales of their cuisine.

There is an interesting story behind Rasheed’s community being called Mappilas. It is a well knows fact that Islam found its way to Kerala through trade and commerce. Muslim merchants voyaged all the way from the Arab world and traveled across the sea to the Malabar Coast for the purpose. They traded in pepper, cardamom and coconut oil. They eventually began to settle in Kerala and married into local families and thus got the name Mappila which is the Tamil word for son-in-law.

The Mappila cuisine today spreads from Kannur to Calicut and is an integral part of the Kerala cuisine. Rasheed shares that it “belongs to the Muslim communities that live in the Northern part of the state. The Kerala chayakada, or tea shop, is also a tradition brought by the traders.”

Till date, the Mappila cuisine has Arab influences that include Yemeni technique of cooking biryani, fried snacks and subtly flavorful spices. “A usual Mappila meal is quite lavish, but also simple. Different kinds of pathiris [rice-flour bread], unnakaya [a dish made with fried bananas], many kinds of sweets, and most importantly, the biryani are the main components,” shares Rasheed.

A distinct feature of the Mappila cuisine that makes it unique among other Kerala cuisines is the use of ghee instead of coconut oil as the cooking base.

Rasheed who started cooking at a very young age shares the tradition of hospitality in Mappila households. She says, “Among the Mappilas, like in all merchant communities, hospitality is taken very seriously. Our house would always be full of guests, or clients of my grandfather and father, and we would keep busy cooking for them.”

While kids of her age sought solace in their grandmothers’ tales, Rasheed was charmed by her grandmother’s cooking and the affinity only grew with age. After her marriage, her kitchen became her station and her universe where she’d revel in food.

Rasheed recollects how she experimented to prepare food for her husband’s clients: “He used to bring clients home, and that was a very important part of our business,” she said. “I used to be very involved in these matters, and cook up meals, I think many of the deals were struck because of my food.”

Everything Rasheed cooks can be traced back to the Mappila roots. Everything right from the ulli vadas, which are onion vadas fried to a crisp to the Kozhi biryani, made of chicken and rice stewed to moist perfection and garnished with dried fruits has a Mappila story attested to it.

Her favorite dish, however, is irachi pathiri which also happens to be a household favourite. For the dish, two rice flour rotis are stuffed with meat, vegetables, and fried by dipping in an egg to get a delectable sweet and savory flavor.

Rasheed’s passion for the Mappila cuisine doesn’t end at introducing people to the lip-smacking recipes. She also wants to share the intricacies of the traditions pertaining to the cuisine.

“Among Mappila Muslims, breakfast is a big deal. Typically, we eat dishes like thala curry, a goat-head curry for breakfast, but the meal is so large, it would also be lunch. These meals are extensive, sensory experiences – and have to be experienced the way they were created,” shares Rasheed.

It was in 2004 when Rasheed first entered the professional kitchen at the Taj Malabar Resort in Cochin. She recalls, “It was like a chef’s mother had entered their kitchen. They were all so surprised, I didn’t want to use any of the gadgets, and I just wanted to cook like I did at home.” Since then she has collaborated with a plethora of chefs, is a prominent part of the food festivals and caters for private events as well.

Her favorite way to share the tales of Mappila cuisines, however, is by hosting tour groups where she can introduce them to the intricacies of the cuisine. “For groups that visit, I organise daylong tours that include trips to the market, sourcing natural and local ingredients and then cooking the slow, traditional way. I want people who come to Kerala to able to immerse themselves in things other than a trip to the beach or a visit to Cochin,” shares Rasheeda.

Rasheed featured in a list of cultural entrepreneurs by Kudumbasree, a women’s empowerment programme run by the Kerala government, last year. Unlike the common belief, she believes that there is an empowerment in being in the kitchen as well. “Being in the kitchen is empowering. It can teach you things – make you realise that food is a good way to express and create,” she shares.

In fact, she intends to empower other women of her community through something that hitherto has been used to suppress them: food. She encourages the women to set up stalls in the food festivals that she is invited too.

Rasheed shares, “I tell them, I will decide the menu, I will set the prices and deal with the customers, now you just cook. I always say to them that cooking is not an ordinary gift. You don’t have to go anywhere else looking for [empowerment] when it’s just sitting there in your kitchen.”