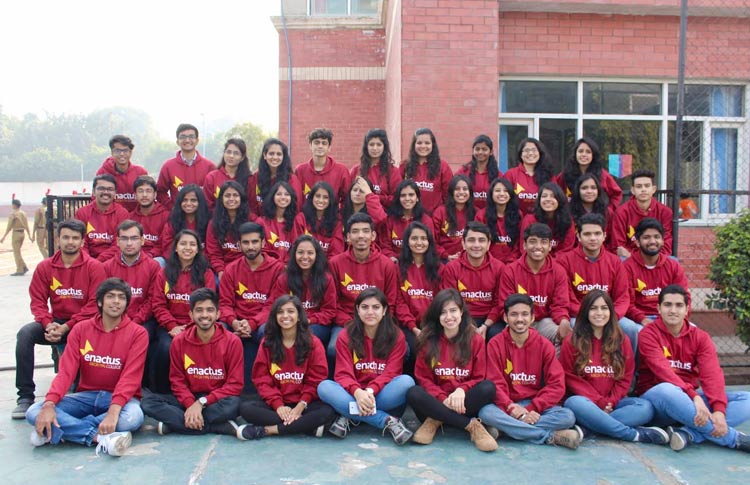 Sitting inside your home, have you ever heard bombs blast while you make dinner? Are you at the constant risk of death?

If no, you’re luckier than you know. Lots of families from Afghanistan packed their bags and approached the most responsive people: the Indian Embassy. They have been eating bits off their savings in India, leaving behind everything but memories back home.

The 40 students of Delhi University began creating edible utensils to avoid the usage of plastic disposables in collaboration with refugee women of Afghanistan. I spoke to 5 of the 40 students to dig deeper into the initiative & the stories of these women.

Tell us about your team. Have they been sensitivity trained?

Shivam: The organization Enactus KMC was founded by 13 members, which is now being led on by 7 position members. We work with a community of refugee women of Afghanistan. Due to the difficult time these women have faced, we make it sure not to use words that trigger their emotions or get them upset in any way, such words include, ‘guns,’ for example.

Saubhagya: Whenever we interact with the women, we try not to dig deeper, because it makes them cry. If at all, any of them even feels close to comfortable with sharing their stories, we encourage them at all times.

How did the concept come up?

Shivam: We divided teams and started brainstorming for appropriate projects. We started looking at the problems of the society & concentrated on finding the solutions.

Saubhagya: However, our research was limited by geography, as we could only operate within the NCR. We finally came up with the idea of creating edible utensils and believe that the idea can be expanded to the other parts of the country, too. Working with the Afghani refugees was fitting too, as it solved two purposes: provided bread and butter to the women, and also produced an alternate for plastic cutlery.

Shivam: For me, they are mild salty biscuits that are crispy, too. We’ve tried eating Gajar ka Halwa using them.

Saubhagya: The texture and taste are similar to golgappas. I once had it with vanilla and chocolate ice cream and tasted pretty good.

Who decided the recipe of the cutlery?

Samaksh: All of us got together at one place and brainstormed. It took us 2-3 months to come up with the recipe. One of our teammates knew baking. She and her mother finally gave us a recipe all of us approved.

Describe your first meeting with the women refugees.

Samaksh: It was when we all went for a group interaction with them. We got to know their story, and how their children were unable to go to school. Unfortunately, not all of us got a chance to personally speak with them.

Shivam: It’s important to see that we’re working with a community that has lived a certain way their entire life. Their living standard has drastically gone down. They struggle to purchase something even as basic as salt, and so emotionally, they were a bit drained.

Saubhagya: I realized from the visits, we don’t realize how privileged we are to be living in peace and enjoying luxuries on a daily basis. We really take it all for granted, don’t we?

At Enactus, after the cost of the manufacturing, logistics and all are met, the revenue generated is passed on to the women.

Nischay: It is a step by step process. Initially, when they joined us, we taught them the recipe, there would always be someone to assist them with the manufacturing of the product. Now, they can manufacture it themselves and all we need to do is market it and make them self-reliant.

One story of a woman that still makes you shiver

Saubhagya: I met a woman who had attained a medical degree back in Kabul. Her husband managed a stationery business in Afghanistan. One day, while her husband was away on business, she got a call from a random number telling her that her husband had been killed by Taliban.

The Taliban had asked him to sacrifice his children or give them money. When he declined both, they killed him.

The woman also told us that the Indian Embassy was the most helpful. She continued, “Taliban is like a bunch of rats. You will never know where they hide and when they come out. It all happens when you least expect, and cannot figure it out at all.”

Nischay: In the story, I heard, the woman told me how Taliban always shows its supremacy by threatening families. For weeks, they would have to keep their lights switched off and live with the fear that they were being watched. If they would step outside, they knew it would be the last day of their lives.

Shivam: When all of this was happening to these women, they were not alone, they had to find ways of survival with their 5-6 children.

Are their children being educated in India?

Saubhagya: The women have about 4-5 children each. Most of the eldest sons are about 19, and also the sole breadwinners of the family. The ones in their teens study at a school nearby, and those below 13 do not study, as of now. The language is a huge problem. Yes, they do feel socially excluded, but they try their best to mold themselves according to our cultures.

A habit they all follow while making the cutlery

Shivam: They are fond of Hindi films, and so they hum Hindi songs.

Samaksh: They love talking when they work. Yes, sometimes they can get emotional.

Saubhagya: They have found a beautiful way to bond with one another. They are now friends.

One thing they taught you

Samaksh: We’ve learned so much from them! No matter what, they are so strong, they take care of themselves, and even their children, under all circumstances. They relied on us and trusted us.

Shivam: Whatever tough things come their way, they are quick with decision-making. For example, they didn’t get emotional and just picked up their bags and left when they sensed a threat to their safety.

Saubhagya: I realized the importance of women in general. I cannot imagine their husbands pulling this off if the situation was reversed.

What did you discover about the Afghan culture through these women?

The Afghani women also asserted that Indians are the most affectionate people they’ve ever known, but are finding it hard to deal with the

They, too, want to be embraced as a part of the country, this is their new home. No, they do not wish to go back. They are finding home, here.

You can buy cutlery from the refugee women of Afghanistan, here.